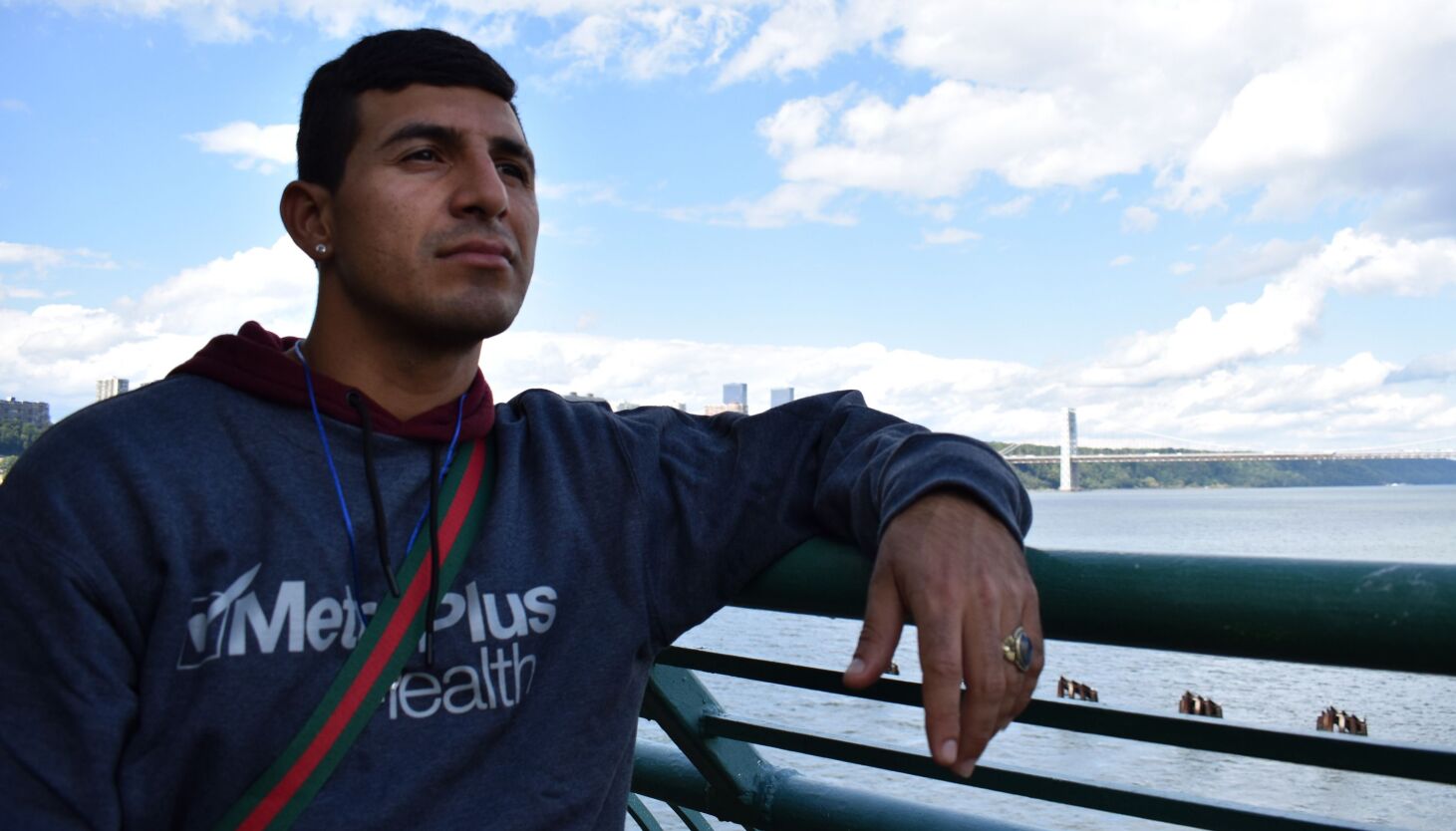 Olga Rodriguez and her two boys were among hundreds of people who went to Riverbank Park in West Harlem on Monday for free food, health coverage, and other forms of assistance, having heard about the event sponsored by the insurance company MetroPlus by its pastor. She and many others are migrants who arrived in New York months ago and are now trying to find their place.

The Colombian has been in the city since July, around the time Mayor Eric Adams first acknowledged an increase in asylum seekers coming to New York. Since then, she said she felt “atada” – which roughly translates to a feeling of helplessness.

Rodriguez lives in an emergency shelter in the Bronx with her children but has not found stable housing. She could not find a job, since her children cannot be left alone at the shelter. And she needs money for a lawyer to help her with her asylum case, but since she has no job, she has no income.

New York continues to experience a surge of asylum seekers, many of whom arrive in the city homeless. But migrants are struggling to leave shelters, with several key housing programs unavailable to them due to their immigration status. Many also do not have access to free legal services to help them manage their asylum claims in federal immigration court as they seek permanent residence in the United States.

While migrants often say their long journey to the United States has been worth it, many also say adjusting to the city has been an uphill battle.

“I ask myself: ‘Did I do the right thing to come here? Or did I make a mistake? said Rodriguez, who worked as a nurse in Colombia but fled her country due to domestic violence, in Spanish. “People say, ‘everyone who comes here as immigrants is hurting, we’re all hurting, and time has to pass, a year, six months, until you see results. Don’t ask for the impossible. And it makes me breathe again. But I get depressed sometimes. »

Is action in Albany necessary?

More than 11,800 of the more than 15,500 asylum seekers who entered the city’s shelters remained there, as of September 28, according to figures provided by the mayor’s office. The city responded by activating 39 emergency shelters and is building a emergency temporary tent shelter for asylum seekers in the Orchard Beach parking lot in the Bronx.

On September 18, a Colombian mother of two who had been living since the spring in a shelter in the town of Hollis, Queens, committed suicide. It drew attention to the plight of migrants stuck in dead-end urban shelters. She had been separated from her husband at the border, who tried unsuccessfully three times to cross. She had struggled to find work, and she and her sons had to ration their food, Documented reported.

“The tragic suicide of an asylum seeker in a city shelter earlier this month illustrates the consequences of a lack of resources,” Councilwoman Shahana Hanif, who chairs the immigration commission, said during a briefing. a monitoring hearing Friday on asylum seekers.

In court, Molly Park, First Deputy Commissioner of the Department of Homeless Services, pointed out a huge barrier to obtaining housing: City vouchers are not available to new immigrants. Park said the matter was not in the hands of the city and that expanding the program to asylum seekers would require Albany’s action.

“We are not legally allowed to provide CityFHEPS to those who do not have papers,” Park said, referring to a city rental assistance extra charge. “In most cases, to be able to pay ongoing rental assistance, even using municipal tax money, requires state legislation.”

Park also said the administration is considering changing the policy requiring families to have lived in a city shelter for 90 days before qualifying for a bond, which could help if bonds become available to new immigrants.

In this past fiscal year, which ended at the end of June, 5,235 single adults and 4,118 families who received subsidies left the shelter system for permanent housing, according to the mayor. latest management report. Only 1,800 single adults and 1,089 families from the general shelter population managed to get out without subsidies.

Joshua Goldfein, staff attorney for the Legal Aid Society, told THE CITY he disagrees with Park’s assertion that the state should approve legislation allowing CityFHEPS to go to migrants. . He said the city council could pass a bill requiring the Adams administration to expand CityFHEPs to migrants, or the administration could do so independently.

“If they expand eligibility for these programs, beyond the very narrow limits of who is currently eligible, more people could leave the shelter,” Goldfein said. “It would also free up more accommodation units for the city to use to house migrants so they don’t have to open as many new shelters.”

Asked about Park’s assertion that state approval is necessary, Goldfein told THE CITY, “We totally disagree.”

A family staying at the Park West Hotel for three weeks said they had not received help from their social worker to move to more stable accommodation. The mother and father, who live with their 10-year-old child and asked not to be named for fear of reprisals from hotel management, said they shared a bed between the three of them and did not received little more than cold food. in the microwave.

In addition, the family cannot leave their child unattended at the hotel when he is not at school. During his interview, the father was heading to work at a hotel in Queens, but the mother had not yet left for her job at a fast food restaurant. Instead, she waited to see if another migrant at the hotel would take care of her son.

“If they take me out of this hotel and into another place where there is a kitchen so I can give my son a proper meal, I will be happy,” the mother said. “I don’t care about the circumstances, even if he’s sleeping on the floor. But at least I could give my son a hot meal.

Reibeth Sanchez, a Venezuelan who arrived in the city two months ago, volunteered for Monday’s event. While here, Sanchez obtained the city’s municipal ID, IDNYC, and health insurance, and is now waiting for his Social Security card.

His advice to others who want to succeed in New York: “It’s not easy but it’s not impossible. But if they feel like coming, they should come,” Sanchez said in Spanish.

He found a construction job a month after moving to the city, having obtained the Occupational Safety and Health Administration (OSHA) certification needed to work in construction in the city. He lives in a men’s shelter in Fort Greene, Brooklyn, where he shares a room with four others. The 27-year-old hopes to move to stable accommodation, but said the job was unstable and he was afraid of losing his bed in a shelter.

But what Sanchez said he needs the most help with is a lawyer to help him with his asylum case.

Camille Mackler, executive director of the Immigrant Advocates Response Collaborative (ARC), said nonprofits that often help asylum seekers with their legal cases are currently overwhelmed with cases being postponed during the pandemic.

“They don’t have the capacity to hire a private lawyer. They literally come here with nothing but the clothes they’re wearing,” she said. “And so they have to rely on nonprofits, and the nonprofits are absolutely at capacity at this point.”

Immigrant ARC has signed with the New York Immigrant Coalition’s Welcome to New York campaign, which is asking the city and state to each provide $10 million to help asylum seekers with legal services, among other things.

For migrants, applying for asylum not only prepares them for a legal stay in the United States, it also puts them on the path to working legally in the country.

Mackler said the courts can take up to three to four months to file each migrant’s case. Once 180 days have passed after filing, migrants can apply for a work permit.

And with the current backlog of asylum applications, it could take another year or so to decide on a case.

The need for work permits for asylum seekers is so pressing that Mayor Adams and other elected officials are urging the federal government pass an emergency measure to speed up the work permit. The city also launched a $5 million solicitation from legal providers to help asylum seekers with their cases. Manuel Castro, Commissioner of the Mayor’s Office for Immigration Affairs, told Friday’s Council hearing that while the arduous asylum process could drag on for years, the goal is to at least help applicants obtain work permits.

Venezuelans Erickson Guedez and Argelia Gimenez are also staying at the Park West Hotel with their daughters, 15 and 8, where they have been for a month. Guedez said he was grateful for the help he and his family received from the city and other groups, saying his daughters were thrilled with the school.

Guedez, who arrived in New York a month and a half ago before the rest of his family, said that aside from some paint jobs, he hasn’t found steady work. But he said he hoped that during the asylum process he would soon be able to work legally in the country and that he had an appointment with a non-profit organization for legal aid. scheduled for Monday.

“What we need most is to work and to have a permit that will allow us to work in peace,” Guedez said in Spanish. “Once we do everything to be legalized, I know it will be fine.”

Get the inside scoop from THE CITY

Subscribe and receive the latest stories from THE CITY every morning

Thank you for your submission!