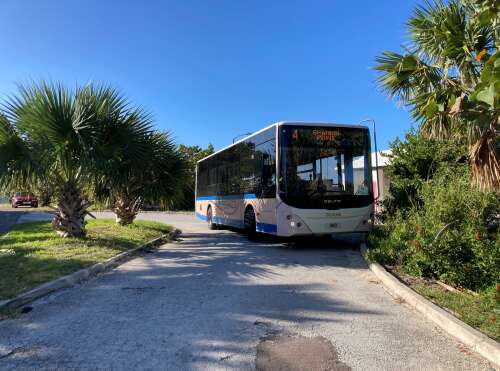 A disabled bus at Spanish Point (Photograph by Akil Simmons)

A labor leader said today Bermudans should be alarmed because industrial relations have hit rock bottom.

Chris Furbert, President of the Bermuda Industrial Union, said: â€œBermuda should be very concerned right now that we are at an all-time low in industrial relations, because now we do not have the Minister of Work that goes to court to obtain some sort of injunction to send our workers back to work, but the Minister of Transport.

â€œIf this is really a manpower issue, then the workforce should take care of it. “

Mr Furbert was speaking after the buses returned to the roads following a wildcat strike.

Services resumed – but on the basis of rule-based work – after transport workers were warned that they could face legal action by the government if they did not return to work.

Lawrence Scott, the Minister of Transport, has set a deadline of noon today for a return to work or he would take the case to court.

Mr Furbert said he appreciated that essential services staff were required to give 21 days’ notice of industrial action.

He added: “Certainly the buses are not essential.”

Mr Furbert said he had had six meetings with officials from the Ministry of Public Transport in the past ten days “on the same issue”.

He claimed there were “inconsistencies” at the Ministry of Public Transport, including differences in the way disciplinary matters were handled.

Mr Furbert said BIU bus maintenance staff shot down tools yesterday in a dispute over conversations they said were taped by a supervisor.

He said two “no confidence” votes against Roger Todd, the director of the DPT, had been “on the table” – one about 18 months ago that Mr Furbert asked his members to step down, and another this year.

He explained that he warned of a Supreme Court lawsuit against the BIU, including himself as chairman, if the members did not return to work by noon.

Mr Furbert said he earlier advised staff to give at least 24 hours’ notice before cutting down tools.

But he insisted that the industrial action, which began without warning, did not suggest he had lost their support.

Mr Furbert said: â€œThe president can advise his members – if the members decide they want to take industrial action, they have more than a right to do so.

“They were fed up and they had the right to be fed up.”

He did not agree that the industrial action amounted to a “wildcat” strike.

Mr Furbert said: “People have the right to withdraw their work if they are not satisfied.”

He said today’s return to work was not directly related to the threat of legal action but was based on how managers handled complaints about the alleged recording.

The DPT said the buses resumed service around 12:30 p.m.

A spokeswoman for the department said the settlement work “could cause additional delays and cancellations” for commuters.

She added, “The ministry appreciates the patience and cooperation of the public and shares the frustration with the disruption of services.”

Mr Scott insisted earlier that the government had not lost control of the situation and argued the strike was illegal.

He warned: “We will take all measures available to us to end this work stoppage, which may include the initiation of damages proceedings in the Supreme Court and an injunction preventing any further. incitement to breach of contract by the BIU on these issues. .

“The government will maintain its no work and no pay policy in this case.”

Mr. Scott has denied having lost control of industrial relations.

He said, â€œI don’t think so. At the moment, we still have tools in our toolkit to address this issue. “

Mr Scott added that he had discussed the deadlock on the buses with Mr Furbert.

He added: â€œMyself, the ministry and the president of BIU are of the opinion that this work stoppage should not have happened.

â€œAs a department, we understand that industrial action is sometimes necessary, but should only be used as a last resort when all other avenues in the process have failed, and in this case it has not. “

Mr Scott said he was ready to take his case to the Supreme Court “to ensure that wildcat strikes or unnecessary class actions do not become a norm in the future”.

But he ruled out the privatization of public transport services.

Mr Scott said: “Privatization does not guarantee that industrial action will not take place.”

He added that he was aware of allegations of secretly recorded conversations.

Mr Scott added: “I understand an investigation is underway.”

Bus service cancellation notices and updates are available at www.gov.bm/bus-alerts.

Sudanese government sells wheat from USAID to pay off debts