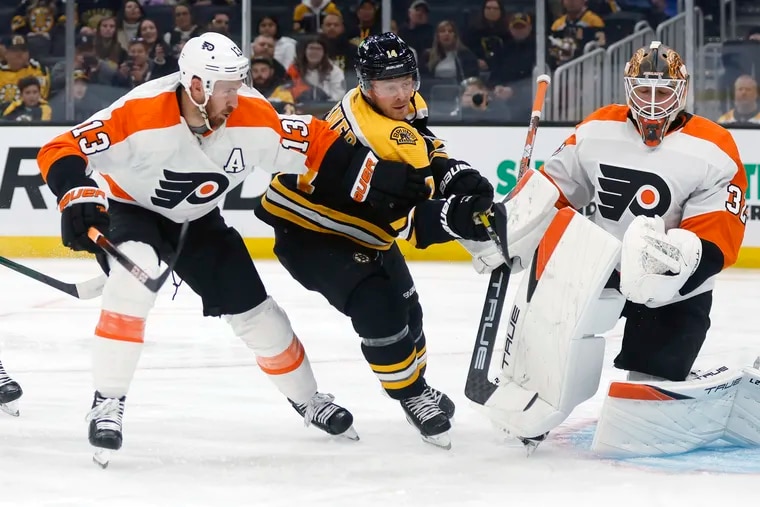 BOSTON — Good teams have good second periods, assistant coach Brad Shaw said Wednesday, and clearly the Flyers are yet to qualify after posting their second straight slow period in a 4-0 loss to the Boston Bruins on Saturday.

Initially, the Flyers seemed to have cleaned up their performance after Wednesday’s game, which stank so badly that coach John Tortorella made sure to repeat it four times in four different ways.

They were killing plays quickly in the defensive zone and making crisp passes to move the puck through the neutral zone and into the offensive end. Although there were a few mistakes, the players went the extra mile to make up for them.

“I thought our first half was fantastic,” Shaw said. “Pretty much everything we expected from our team. And then Boston picked it up a bit, but I thought we eased off. I really think we let them in. And that’s a dangerous thing.

After winning the shooting battle 8-2 in the first, they were outscored 13-5 in the second. They played tired and as a result fell behind 1-0. They couldn’t bounce back in the third, spending too much time in the defensive zone. It completely killed their momentum and the Bruins seized the opportunity. In the third period, Boston scored three unanswered goals, including one in an empty net.

Noah Cates was talked about in training camp, but behind every mention of Noah also comes praise for his older brother Jackson. While 23-year-old Noah has earned appreciation from the organization due to his knack for doing the little things right, Jackson has been praised for his fitness and consistency.

But praise always comes with an asterisk – all of those strong performances came while the two were playing side-by-side.

READ MORE: The Cates brothers’ unbreakable bond carried them from their basement in Minnesota to the Flyers

But on Saturday, the Flyers parted ways. Noah skated with Morgan Frost, who he spent a lot of time with last season, and Tyson Foerster, while Jackson centered Hayden Hodgson and James van Riemsdyk. Jackson and Noah were even separated on the penalty kill. It took some getting used to — Noah said when they called Jackson’s line, he jumped — but it also allowed them to demonstrate different aspects of their games.

Individually, each made a few notable plays. In five-on-five and powerplay play, Noah stood out creating good scoring chances and showing his playmaking ability. Meanwhile, Jackson killed a Bruins first power play with a takeaway that led to a Bruins penalty. However, it took some getting used to.

“It’s just kind of professional hockey, it’s going to happen,” Noah said. “The lines change a lot, so, you have to get used to it, you know, can’t get too attached to a player, or whatever. So I like playing with him, and, you know , I’m fine with not playing with him.

By the time the season rolls around, the penalty kill will be well prepared. In three preseason games, the Flyers were shorthanded 12 times. On Saturday, they added four more to maintain their average of four shorthanded chances per game.

For the purpose of evaluating player performance in special teams and teaching systems, this is good practice.

“I think our penalty kill took a big step today in terms of the pressure and the little things that we talked about before the game,” Shaw said.

But for a team that sprinted nonstop during training camp, playing shorthanded only made them more tired.

Before the two penalties in the second period (and a major Zack MacEwen fight), the team was playing its best game of the preseason. Their slow second was not helped at all by penalties. And when they tried to come back in the third, they quickly started the penalty again, stifling / any potential momentum.

“I think when you allow a power-play goal, I think they’re demoralizing,” Shaw said. “I want the penalty kill to be a kind of momentum infuser for us.”

One of Tortorella’s first orders as Flyers coach was to tell Kevin Hayes he was going to be tough on him. In response, Hayes came out strong on Saturday in front of his home crowd and that of Tortorella.

Hayes, who said the only good thing about his first preseason performance was that he felt healthy, has created the offense in the past with his big frame and skill. He showed it early on Saturday as well, creating opportunities on offense and on the power play.

Most notably, Hayes performed well in other aspects of the game as well. He put on some solid defensive play late in the first when he retreated quickly into the defensive zone and got his stick and body in the right position to break up a Bruins attack. He also contributed on the penalty kill, aggressive forechecking to make it difficult for the Bruins to prepare.

However, as the team falters, so does Hayes’ play. As the Flyers sank into a deeper hole, Hayes’ performance, or lack thereof, contributed to the third goal. The center was caught napping in the defensive zone, losing his man, John Beecher, at the back post as Beecher redirected Derek Forbort’s pass with his skate to make it 3-0 to Boston.

Goals two and three were kind of my fault,” Hayes said. “And I know it’s pre-season, but that kind of thing can’t happen. And I thought that until then, I was playing pretty well.

READ MORE: Goals remain a big issue for the Flyers

The Flyers travel to Long Island on Sunday for their second straight game. The puck drop against the New York Islanders is scheduled for 7 p.m.