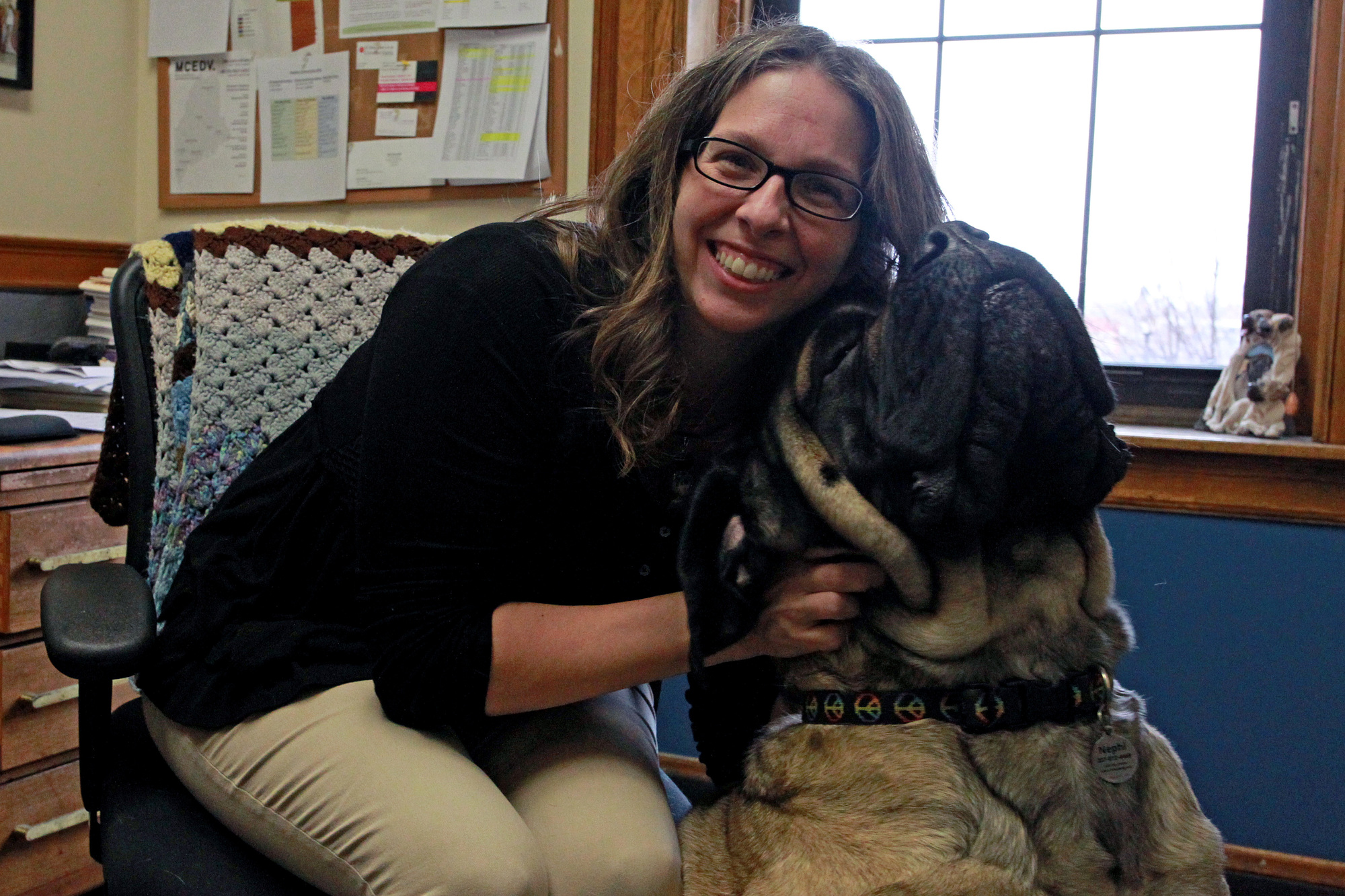 HOULTON, Maine – Walking into a courthouse can be intimidating, especially for those seeking help as a victim of crime.

Fortunately, for those who come to Houlton’s DA’s office, there is a gentle giant waiting to bring solace.

Nephi, a 3-year-old English Mastiff weighing almost 200 pounds, may seem quite intimidating, but the Certified Therapy / Volunteer Dog is as gentle as he can get. He has proven to be a remarkable asset to the office, and District Attorney Todd Collins hopes to make Aroostook the first district to use courthouse dogs to help victims of crime.

Nephi is owned by Valerie Eldredge, the lawyer for victims / witnesses at the courthouse. Eldredge is trained to support victims of crime, whether through emotional support, providing information about victims’ rights, or helping find much-needed resources. Lawyers frequently accompany victims and their family members throughout criminal proceedings.

And Nephi was there to help them too.

“My husband Jason told me I can have a puppy and we have six kids, so I wanted something lazy that was good with the kids,” Eldredge said. “I knew exactly what kind of dog I wanted – a Mastiff.”

Finding the right dog proved difficult as she first explored the idea of ​​saving a dog rather than buying one. She called breeders as far as Ohio to find her new puppy, but eventually found a breeder in Oakfield who had exactly the dog she was looking for.

At the time, the Eldredge family lived in Bar Harbor, but knew Aroostook County, having grown up in Merrill. A 2002 graduate from Southern Aroostook Community School, Eldredge was put in touch with Richard and Rosie Tracy of R&R Kennel in Oakfield, and the match was almost instantaneous.

She met Nephi when she was 5 weeks old, the runt of the litter. A few weeks later, when she picked him up, he weighed 15 pounds.

“All the other puppies were super excited, but he was just super cool so I knew he was perfect for our family,” she said. “I knew right away that he would be perfect for a therapy dog ​​job.”

She began to work with Nephi, getting him used to being with others. When he was 6 months old she knew he was meant to be a therapy dog. However, Nephi had to wait until his first birthday before he could take the official test.

The Eldredges eventually moved to Merrill, where her husband runs the family farm of miniature cows.

She joined the District Attorney’s Office as a Victim / Witness Advocate in September and soon learned that District Attorney Todd Collins was exploring the idea of ​​adding an official therapy dog ​​to the list.

“We were working on getting a dog for the DAO (district attorney’s office) as a courthouse installation dog,” said District Attorney Todd Collins. “I was working on a plan for one, when Valérie found us and agreed to work with the DAO. That she had a therapy dog ​​was pure fluke.

Collins hopes Aroostook County can become the first district in Maine to employ courthouse dogs to comfort children and victims of violent crime throughout the court process. The goal is to reduce the stress and psychological damage suffered as survivors and witnesses relive the traumatic events that brought them to court.

“The county (the commissioners) approved a dog for our caribou office,” he explained. “We still have to generate some policies and procedures, and it will be at least a year before the new dog is ready for work. We work with Purpose Pups in Houlton.

Nephi has yet to attend a hearing session as an official therapy dog. Instead, he’s just a volunteer, coming to work a few days a week with Eldredge, going to Eldredge’s Mini-Cooper courthouse where he takes up the entire back seat.

“I’ve always done some type of advocacy work,” she said. “Nephi is the best partner I could have asked for. The idea of ​​having an adorable big dog makes a predicament that much easier.

Nephi became something of a celebrity around the Houlton District Courthouse. Whenever she takes him for a lunchtime walk, Eldredge says they’re often stopped by people asking if they can pet him or take a photo with him.

“Everywhere we go people come to talk to us,” she said. “He’s so cool, he’s taking it all impatiently.”

More articles from the BDN