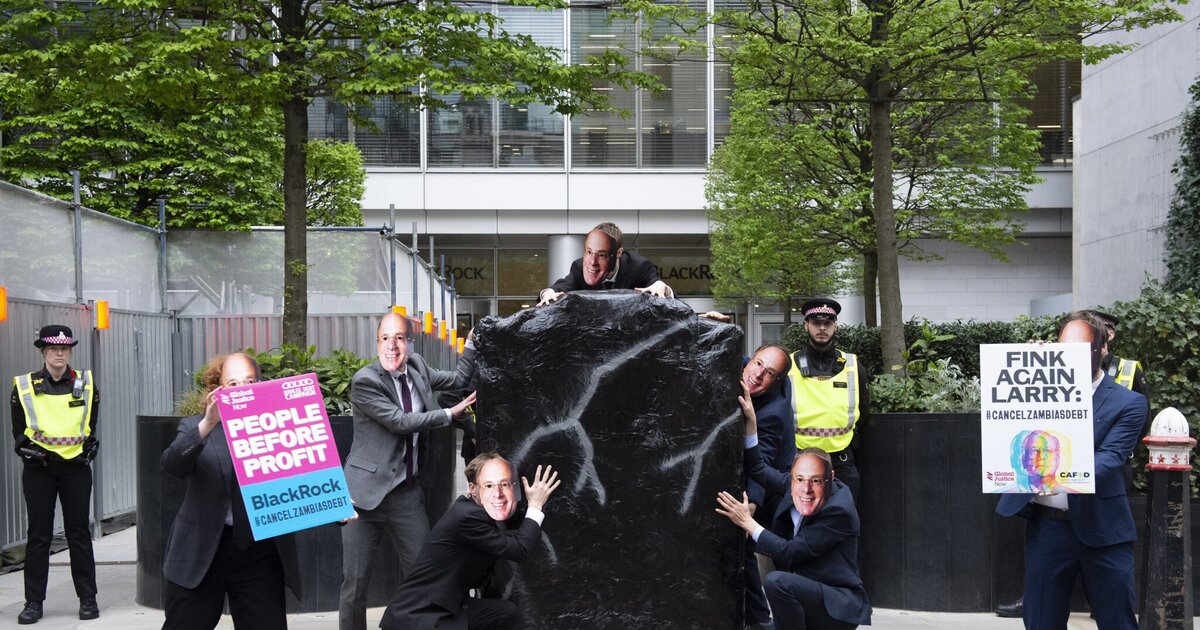 More than 100 economists and development experts have called on BlackRock and other creditors to write off a significant chunk of Zambia’s debt. In a open letter released today, signatories – including Jeffrey Sachs, Jayati Ghosh, Philip Alston, Raj Patel and Cephas Lumina – are calling for large-scale debt restructuring, and for the UK and New York to pass legislation ensuring that all private creditors comply with the G20
G20
The Group of Twenty (G20 or G-20) is a group made up of nineteen countries and the European Union whose ministers, central bank directors and heads of state meet regularly. It was created in 1999 after the series of financial crises of the 1990s. Its objective is to encourage international consultation on the principle of an expanded dialogue based on the growing economic importance of a certain number of countries. Its members are Argentina, Australia, Brazil, Canada, China, France, Germany, Italy, India, Indonesia, Japan, Mexico, Russia, Saudi Arabia, South Africa, South Korea, Turkey, the United States, the United Kingdom and the European Union (represented by the Presidents of the Council and of the European Central Bank).
the debt relief program.

Zambia is starting negotiations this month with private creditors to reduce the amount of its debt. On September 6, the The IMF has called for the cancellation of $8.4 billion in Zambia’s debt payments between 2022 and 2025.

In the letter, the experts say:

“Due to the top interest rate
Interest rate
When A lends money to B, B repays the sum lent by A (the capital) together with an additional sum called interest, so that A has an interest in consenting to this financial transaction. Interest is determined by the interest rate, which can be high or low. To take a very simple example: if A borrows 100 million dollars for 10 years at a fixed interest rate of 5%, the first year he will repay one tenth of the capital initially borrowed (10 million dollars) plus 5% of the capital. owed, or $5 million, for a total of $15 million. In the second year, he will repay 10% of the principal borrowed again, but the 5% now only applies to the remaining $90 million still owed, or $4.5 million, or a total of $14.5 million. millions of dollars. And so on, until the tenth year when he will repay the last $10 million, plus 5% of the remaining $10 million, or $0.5 million, for a total of $10.5 million. Over 10 years, the total amount repaid will be $127.5 million. The repayment of the capital is generally not made in equal installments. In the first years, the repayment mainly concerns interest, and the proportion of capital repaid increases over the years. In this case, if the repayments are stopped, the outstanding capital is higher…

The nominal interest rate is the rate at which the loan is contracted. The real interest rate is the nominal rate less the rate of inflation. and the fact that Zambia’s bonds were trade
Market activities
trade
Buying and selling financial instruments such as stocks, futures, derivatives, options, and warrants in the hope of making a short-term profit.
well below face value since 2018, many bondholders stand to make huge profits at the expense of Zambian citizens and creditor countries if paid at face value. It is therefore imperative that BlackRock and other bondholders agree to fully commit to large-scale debt restructuring, including deep haircuts, in order to make Zambia’s debt sustainable.

The idea behind the initiative is as follows: a country on the HIPC list can start a PAS program for two times three years. At the end of the first stage (the first three years), IMF experts assess the “sustainability” of the country’s debt (based on medium-term projections of the country’s balance of payments and the present value ratio net (NPV) of debt to exports.
If the country’s debt is considered “unsustainable”, it is eligible for a second stage of reforms at the end of which its debt is made “sustainable” (that it gives itself the financial means necessary to repay the sums due). Three years after the start of the initiative, only four countries had been deemed eligible for very little debt relief (Uganda, Bolivia, Burkina Faso and Mozambique). Faced with these poor results and the Jubilee 2000 campaign (which was the subject of a petition of more than 17 million signatures during the G7 meeting in Cologne in June 1999), the G7 (group of the 7 more industrialized) and the international financial institutions have launched a strengthened initiative: the “sustainability” criteria have been reviewed (for example the value of the debt must only amount to 150% of export revenues instead of 200-250% as was the case before), the second stage of the reforms is no longer set in stone: a diligent student can anticipate and benefit from debt relief sooner, and thirdly, temporary relief can be granted after the first three years of reform.

At the same time, the IMF and the World Bank changed their vocabulary: their loans, hitherto called “enhanced structural adjustment facilities” (ESAF), were now called “growth and poverty reduction facilities” (GPRF) while that “structural adjustment policies” are now called “Poverty Reduction Strategy Paper”. This document is drafted by the requesting country with the assistance of the IMF and the World Bank and the participation of representatives of civil society.
This reinforced initiative was widely publicized: the international media announced a 90%, even 100% cancellation after the Euro-African summit in Cairo (April 2000). Yet, on closer inspection, the HIPC Initiative turns out to be yet another deceptive maneuver that suggests but in no way implements debt cancellation.

The signatories conclude by saying:

“In times of global crisis, it is economically inefficient and morally reprehensible for high interest
Interest
Amount paid as remuneration for an investment or received by a lender. Interest is calculated on the amount of capital invested or borrowed, the duration of the operation and the rate that has been set.
debts to be paid to private lenders, while governments reduced support for their own people. The world urgently needs a strengthened program to deliver debt restructuring for countries and people in need.”

Zambia first requested debt relief through the G20 Common Framework for Debt Restructuring in February 2021. No debt has yet been restructured, but in July 2022 government lenders including China agreed in principle conclude a restructuring in accordance with the IMF
IMF
International Monetary Fund
Together with the World Bank, the IMF was founded on the day the Bretton Woods agreements were signed. Its first mission was to support the new standard exchange rate system.

When the Bretton Woods fixed rate system came to an end in 1971, the main function of the IMF became that of being both policeman and fireman of world capital: it acts as policeman when it applies its structural adjustment policies and as a firefighter when he intervenes. to help governments at risk of not repaying their debt.

As with the World Bank, a weighted voting system works: according to the amount paid as contribution by each member state. 85% of the votes are needed to modify the IMF Charter (meaning that the USA with 17.68% of the votes has a de facto right of veto on any change).

http://imf.org’s assessment of how much debt relief is needed. Zambia is now seeking to strike a deal with private lenders, which is also in line with the IMF’s assessment.

BlackRock is the largest owner of Zambian bonds, holding $220 million. Debt justice has valued that BlackRock could gain 110% profit
Profit
The positive gain generated by the activity of a company. Net profit is profit after tax. Distributable profit is the part of net profit that can be distributed to shareholders.
for himself and his clients of Zambia’s debt if fully paid. The Zambian Civil Society Debt Alliance, Debt Justice, Global Justice Now, Action for Southern Africa (ACTSA), Christian Aid, Cafod and Jubilee Scotland are campaigning for BlackRock and other private lenders to cancel the debt.