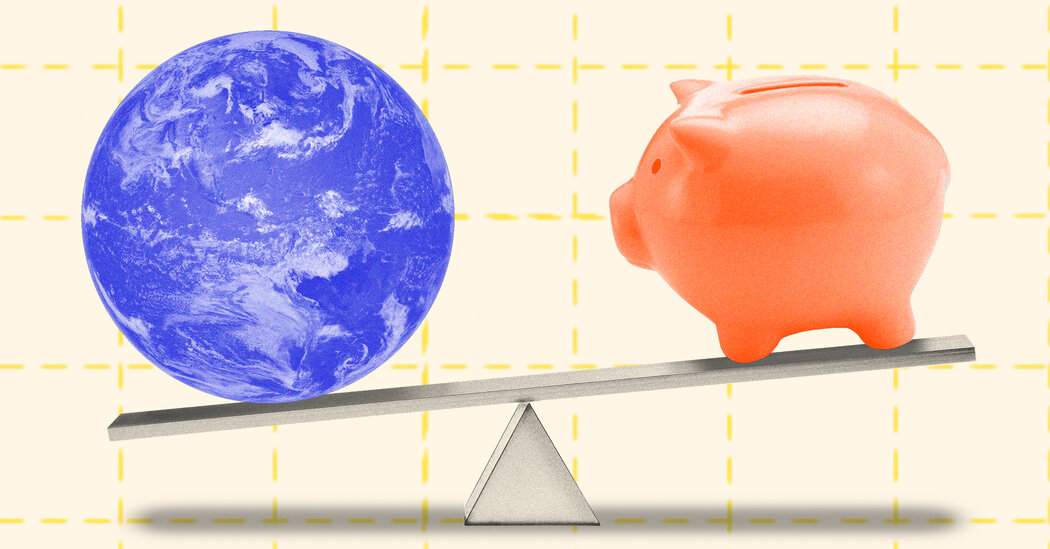 Reviews | Stopping climate change doesn’t have to be altruistic

One of the 700 or so things that make climate change such a thorny problem is that in order to combat it, people today must do things for the benefit of future generations. And, you know, what have future generations done for us?

He argues that he has such a win-win solution. He says the nations of the world should immediately adopt high carbon taxes, but offset them by reducing other types of taxes such as those on income, sales and property. Compensatory tax cuts, he argues, should be so large that they increase budget deficits, burdening future generations with debt that will have to be repaid.

So that covers how people living today would benefit – lower taxes. What about future generations? Isn’t that a bad deal for them?

No. It is true, they will have these debts to repay. But the measures taken today to tackle climate change will have such big benefits, says Kotlikoff, that future generations will also be better off than they would have been.

But that’s not even the most counterintuitive part of Kotlikoff’s plan. In the future, he argues, some poor countries like India will have to send money to richer countries like Canada. Its logic is that India and other countries close to the equator will get the most benefit from preventing climate change, while Canada, Russia and a few other countries in the north will be overall neutral or even worse, because they will have to pay a lot to help prevent climate change, while earning little or nothing. So to make sure every nation benefits from the plan, winners like India should compensate losers like Canada and Russia.

Kotlikoff calculates that according to his plan, all generations in all nations would be improved by about 4% from where they are now.

Kotlikoff does not do this work alone. He collaborates with a large group of experts in computational economics: Felix Kubler, professor of financial economics at the University of Zurich; Andrey Polbin, head of macroeconomic modeling at the Gaidar Institute for Economic Policy in Moscow; and Simon Scheidegger, assistant professor of economics at the University of Lausanne. Since 2019, they have writing Three papers on various aspects of the plan, the most recent of which was released last month. They also published a trial last Wednesday on the economic site VoxEU. They are working on a fourth academic article that takes into account the uncertainty about the trajectories of the economy and the climate. Kotlikoff says that uncertainty does not change the general direction.

While the plan is designed to benefit all nations and all generations on average equally, there would be people in every nation and generation who would lose – and could fight against the plan. Coal miners, for example. But Kotlikoff says individuals could also be compensated so everyone wins. For example, the government could pay the wages of coal miners for a period after the mines close or make lump sum payments to people whose journeys became more expensive when the price of gasoline rose. He admits that it would be difficult to get the exact payments.

As for India paying Canada: that probably won’t happen. This aspect of the plan stems from Kotlikoff’s premise that economists should not be making moral judgments about who deserves or not, but should simply seek solutions that make everyone better. (Kotlikoff says politicians could eliminate transfers from India if they wanted to, “but we can’t rely on altruism or morality” as the basis of the plan.)

Conversation of opinion
The climate and the world are changing. What will be the challenges of the future and how to respond?

Gernot Wagner, a climate economist at New York University, argues that Kotlikoff and his co-authors’ claim that they are doing pure economics without a prescription does not hold water: the kind of political prescriptivism they accuse others of.

Still, the central idea of â€‹â€‹Kotlikoff’s proposal – the search for win-win solutions – is something Glasgow climate conference negotiators should ponder when they air this week. Alan Auerbach, economist at the University of California at Berkeley, who developed with Kotlikoff a important tool for studying intergenerational equity in the 1980s, told me that Kotlikoff and his team are on to something. â€œThe underlying point they’re making is absolutely right,â€ he says. There has to be a way, he agrees, to distribute the gains from stopping climate change in a way that makes it better for everyone.

This is the likely monthly amount by which the Federal Reserve will reduce purchases of Treasury securities and mortgage-backed securities.

The Fed increased its bond holdings at a rate of $ 120 billion per month to maintain long-term interest rates and support economic growth. According to minutes At the Federal Open Market Committee’s Sept. 21-22 meeting, attendees “generally commented” that the $ 15 billion decrease in the pace of purchases each month “provided a simple and appropriate model for policymakers to follow.” The committee is expected to announce its decision on when and how quickly to curtail its purchases on November 3.

Quote of the day

â€œWhen it comes to reforming things, instead of distorting them, there is a clear and simple principle, a principle that we will probably call a paradox. In such a case there is a certain institution or law; say, for the sake of simplicity, a fence or a gate erected across a road. The most modern type of reformer cheerfully approaches it and says, â€œI don’t see the point; let’s clean it up. To which the smartest type of reformer will do well to answer: “If you don’t see the point, I certainly won’t let you dig it up.” Go away and think. Then when you can come back and tell me you see the use of it, maybe I will allow you to destroy it.

Do you have any comments? Send a note to [email protected]