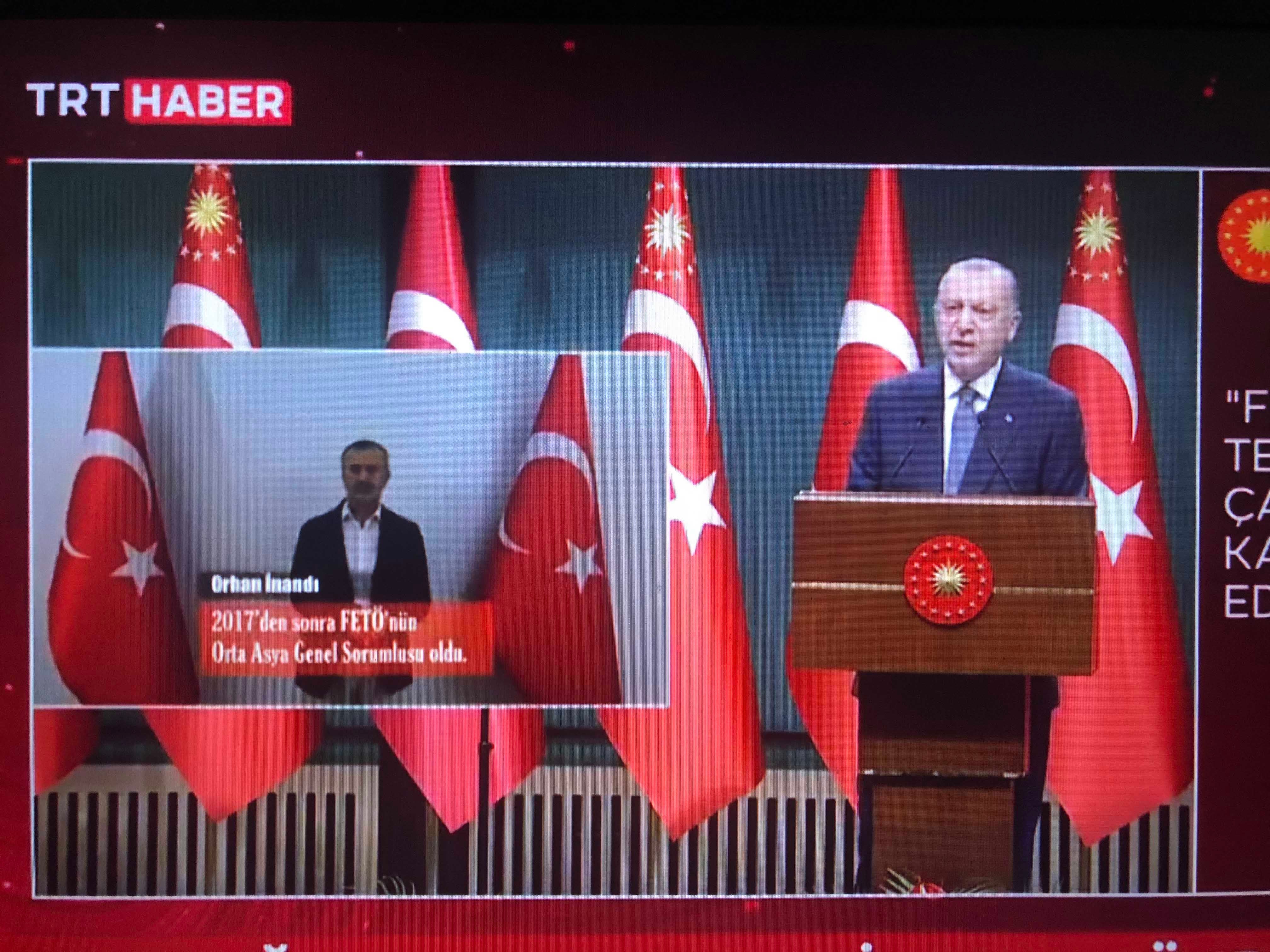 Orhan Ä°nandÄ±, director of a network of prestigious schools in Kyrgyzstan, is the latest victim in a series of cases in which Turkish intelligence services have been implicated in the illegal transfer of people to Turkey from countries in the whole world. Those targeted are said to be linked to the movement of US-based Sunni cleric Fethullah GÃ¼len. The Turkish government regards the GÃ¼len movement as a terrorist organization responsible for the attempted military coup of July 2016 in Turkey.

“The kidnapping, enforced disappearance and illegal transport of Orhan Ä°nandi to Turkey from Kyrgyzstan once again demonstrates Ankara’s ruthless disregard for the rule of law in general and the most basic standards of international law” said Hugh Williamson, Europe and Central Asia director at Human Rights Watch. â€œThat Ä°nandÄ±, a Turkish-Kyrgyz dual national, could be kidnapped and reported missing for weeks on Kyrgyz soil, only to be illegally expelled from the country by Turkish intelligence services, suggests that the Kyrgyz government is unwilling or unable to stand up to Ankara or directly to collude with them.

On July 5, 2021, Turkish President Recep Tayyip ErdoÄŸan told the media that Turkish intelligence services had taken Ä°nandÄ± to Turkey, where he had been “brought to justice”, showing video footage of him handcuffed in front of Turkish flags. Ä°nandÄ± had been missing from Bishkek since May 31, apparently removed from his car, which was found abandoned. He remained missing until ErdoÄŸan’s announcement. Claims by Ä°nandÄ±’s wife that he was detained for weeks at the Turkish Embassy in Bishkek after his kidnapping have not been officially confirmed by either the Kyrgyz authorities or the Turkish authorities.

On July 6, Kyrgyz President Sadyr Japarov said in an interview that the government would demand Ä°nandÄ±’s speedy return to Kyrgyzstan. He also said that since 2016 there have been three attempted kidnappings of Ä°nandÄ±, the most recent in early 2021 prevented by the Kyrgyz State Committee on National Security. Also on July 6, the Kyrgyz Foreign Ministry delivered a diplomatic note to Turkish Ambassador Ahmet SadÄ±k Dogan, urging Turkey to return Ä°nandÄ± to Kyrgyzstan and ensure that he is not mistreated in detention. , in accordance with the standards of international law. Although there has been no official response, Ambassador Dogan has been quoted in the media as saying Ä°nandÄ± is a Turkish citizen.

Civil society groups and others have expressed shock at Ä°nandÄ±’s forcible transfer to Turkey, fearing that the Kyrgyz government has not thoroughly investigated his disappearance. The impartiality of the Kyrgyz law enforcement has been called into question in this case, in particular the State Committee on National Security, following allegations by the Turkish media that the Kyrgyz authorities were complicit in the disappearance. forced from Ä°nandÄ±.

This was complicated by news on June 16 that the State Committee had not investigated Ä°nandÄ±’s kidnapping, but rather his Kyrgyz citizenship. Although on June 1, President Japarov called on the Kyrgyz police and the State Committee on National Security to intensify the search for Ä°nand, on June 24, the Bishkek Attorney General’s office confirmed to the Ä°nandÄ±’s wife, Reyhan Ä°nandÄ±’s legal team, that the committee had not been part of the investigative working group.

Over the past five years, dozens of men suspected by Turkish authorities of having links with the GÃ¼len movement, living in countries around the world, have been arbitrarily detained and forcibly returned to Turkey. They are being held there on false charges of terrorism in violation of due process rights and international law protecting fundamental rights, including liberty and security, a fair trial, and freedoms of opinion, expression and expression. association.

In several of these cases, the United Nations Working Group on Arbitrary Detention has issued conclusive opinions that Turkey has subjected men to arbitrary deprivation of liberty. In many cases, as part of the illegal process to force their return to Turkey, the men have been the victims of enforced disappearances.

In an enforced disappearance, a person is deprived of their liberty by or with the consent of state agents, but their detention is refused or their fate is concealed, in violation of legal protections against these blatant forms of detention. arbitrary. As has happened in other such cases, there are serious and credible concerns that Ä°nandÄ±, already arbitrarily detained, will face prolonged illegal pre-trial detention and an unfair trial.

“The Turkish government should immediately reveal where Ä°nandÄ± is being held in Turkey and secure his immediate release,” Williamson said. “As long as he remains in detention, he must undergo a full and in-depth medical examination by an independent doctor in a hospital without the presence of security guards and have urgent access to a lawyer of his choice for his appearance. fast before a judge. Kyrgyzstan should take steps to ensure the security and protect the human rights of its citizens and hold to account all those responsible for its kidnapping, enforced disappearance and illegal return to Turkey.